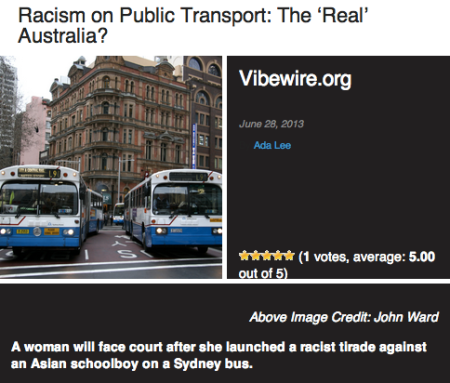 A woman will face court after she launched a racist tirade against an Asian schoolboy on a Sydney bus.

Video footage, recorded by an onlooker, went viral across mainstream and social media earlier this month. The video shows a 55-year-old woman telling an Asian schoolboy to get a passport and educate himself after he refused to sit down. “Go back on your f—ing boat and f— off, ” she said. “There’s a lot of Aussie passengers on this bus and I’m telling you, they’re totally not going to agree with you…and I’m one of them… Come to this country, you [think you] can do whatever you want. Well you know what? You can’t!”

Analei Netzler, a university student from Sydney, was sitting on the M41 bus at the time. She recalled that everyone was silent and shocked except for another woman who encouraged the aggressor. When asked why she didn’t intervene, Ms Netzler said: “Don’t get me wrong I was super mad but arguing with a drunk, racist and aggressive person is not something I want to do. Her views aren’t going to change simply because I’ve said it’s wrong.” “Those views are generational and built over a lifetime”, she said.

After viewing the footage, police began searching for the woman. Just after 5pm on Tuesday 25 June, officers found her at her Balmain apartment and charged her for offensive language, according to NSW police. She is to appear at Burwood Local Court on 6 August 2013. Offensive conduct charges can attract a maximum of three months imprisonment.

In response to the viral video, online comments expressed outrage and embarrassment at the woman’s remarks. Some people called her an ignorant ‘Bogan’ on welfare. Many claimed they would have stepped in and stopped the woman. Many argued the bus driver should have kicked her off the bus and many applauded the boy for staying calm.

As shocked as people seem to be by this racist outburst, this incident is not an anomaly.

In February, ABC newsreader, Jeremy Fernandez, was kicked off a Sydney bus after facing 15 minutes of racial abuse. He tweeted: “Worst thing is- i had my 2yo daughter with me. She [woman who verbally abused Fernandez] had her primary school aged kids with her. All heard every word of her racist rant”. In April, Melbourne commuters berated a woman who was hurling racist abuse at an African man on the train. A woman who moved to Australia from the Philippines 25 years ago was also racially abused on a Melbourne train in April when a woman told her, “If my son doesn’t want to sit near someone of your race that’s totally his opinion and neither do I”.

As an Australian-born Malaysian, it is interesting for me to witness the shock that follows these publically broadcasted incidents. For many, these videos come to emblemise Australia’s hidden racism, the underbelly of multicultural Australia. Ms Netzler reflects, “Although Australia is very multicultural I feel as if a lot of Aussies ‘tolerate’ multiculturalism rather than accept and embrace it.” She added: “As a whole I don’t think it’s a racist country. While I think people like her are strong indicators that the old mindset still exists, it represents Australia in the past.”

Growing up in Australia, I do not think there are many Asian kids who could say they have never encountered a racial slur. In primary school, kids might make fun of your eyes or your yellow skin. You might get treated like the token Asian or be told “You’re pretty, for an Asian”. Once, I was talking to a friend on the street when a woman shouted at us that our presence was annoying her and that we should go back to our country. Whether it comes from friends or strangers, whether it is malicious or unintentional, being pointed out on race is not uncommon for many non-Anglo Australians. Not all people will respond in the same way. Sometimes, it hurts. Sometimes, it is taken as a joke. Sometimes, it makes people stronger and prouder of their cultural heritage.

Do all these incidents prove Australia is a racist country?

I do not think it is fair to label all Australians as racist. The 55-year-old woman who told an Asian schoolboy to “Go back on your f—ing boat” does not represent the Australian nation. She does not represent my teachers or my friends or the other people on that M41 bus.

At the same time, she is not alone in Australia. Much of the online outcry seems to echo: “Everyone is racist except for me”. We shame the woman from Balmain for her overt racism. We shame Eddie McGuire for his casual racism. We blame political rhetoric, the media and a failing education system for racism in society. We call the perpetrators ignorant ‘Bogans’ on Centrelink who are nothing like ourselves and who do not represent the ‘real’ Australia.

While it is important to identify any hidden undercurrents of racism in society, sitting on a high horse without any self-evaluation is unlikely to bring substantial change. Racism can come from all backgrounds, from all types of people. Racism ends with me.