Buying Time From The Poor 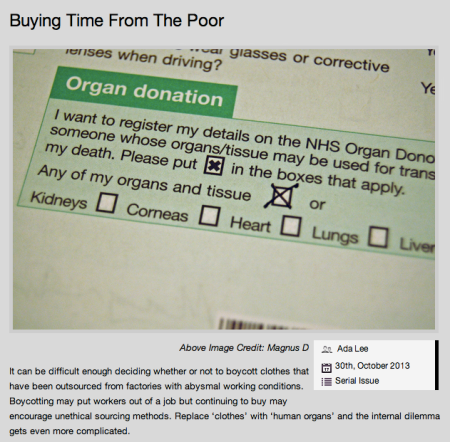 It can be difficult enough deciding whether or not to boycott clothes that have been outsourced from factories with abysmal working conditions. Boycotting may put workers out of a job but continuing to buy may encourage unethical sourcing methods. Replace ‘clothes’ with ‘human organs’ and the internal dilemma gets even more complicated.

Like a diamond ring or the clothes on your back, it is hard to imagine that a donated organ may come from a slum in India or a shack in Brazil. Only this time, an organ can give you what you didn’t think anyone could: time.

World Health Organisation statistics from 2011 recorded 112, 631 solid organ transplantations worldwide, which only satisfied about 10 per cent of global needs. With global demand significantly higher than global supply, patients may seek alternative routes and countries to desperately find an organ.

If you could get a life-saving organ from the slums of India or a shanty town in Brazil, would you take it?

A nephrologist (kidney physician) from the Netherlands, taking part in a 2013 study, showed empathy to those who buy. “It’s a matter of life and death.” “It is to be expected from a rational minded person that he will look for other ways to find organs”.

It can be a difficult decision whether to buy or die. Before he died, Steve Jobs spoke of the importance of death as “the single best invention of life.” “It’s life’s change agent”, he said. “It clears out the old to make way for the new.” So, when death comes knocking, do we fold or do we fight for another day? How do we know when, if ever, is the right time to die? In the context of global organ trading, some may be better equipped to fight for more time than others.

With technological advances comes the prospect of immortality for the rich, argues Elliot Leyton, anthropologist from Memorial University of Newfoundland. Leyton argued that the commodification of body parts, sold in a new world market, “offers the wealthy and the well-connected an indefinite extension of life, limited only by the abilities of current medical technology.” “[T]he rich now live forever (at least in theory)”, he wrote.

On the flipside, imagine you are living in poverty and have no money to pay for your daughter’s hefty dowry or for your children’s education. If technological advances and global networks allowed your body to become a new source of currency, would you use it?

Several academics have argued over the ethics of the global organ trade and whether the decision to donate an organ is autonomous or subject to exploitation. That is, whether organ commodification is an empowering means of escaping abject poverty or a mechanism that exploits the desperation of the abjectly poor.

However, others may criticise this perspective as social paternalism, arguing that an individual should be free to choose what to do with their own body. “I would sell my own kidney if I could therefore feed my children or give them good education. I cannot be judgmental about that”, one nephrologist reflected.

Poverty is the problem, not global organ transplantation, Radcliffe-Richards argues. “Removing their option to sell leaves them poor and makes their range of options smaller still.” Rather, Radcliffe-Richards believes we need to combat poverty at its root and provide safer means of organ extraction.

Alternatively, Scheper-Hughes (2000) argues that selling organs is hardly a fair option to suggest in the first place. When considering the social and economic poverty faced by donors, she argues the “choice to sell a kidney in an urban slum of Calcutta or in a Brazilian favela (is) anything but a free and autonomous one.” The seeming ‘consent’ to commodify one’s organs is forced upon donors by crippling circumstances.

Veena Das, anthropologist from Johns Hopkins University, agrees that putting a market price on body parts in not a means of escape but rather, “exploits the desperation of the poor, turning their suffering into an opportunity”.

In an increasingly globalised world with advancing medical technologies, there comes greater opportunity to save and extend lives. But there is also the risk that this new market may further entrench global inequalities.