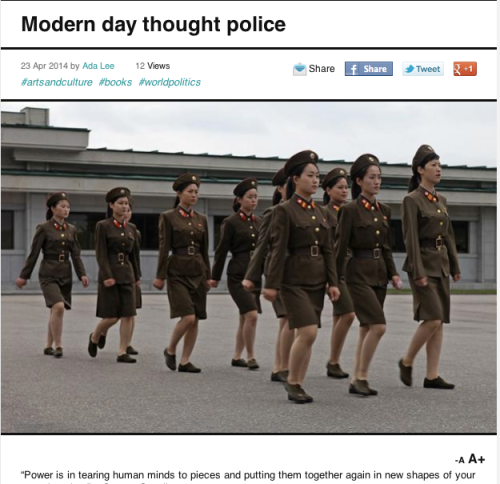 “Power is in tearing human minds to pieces and putting them together again in new shapes of your own choosing.” – George Orwell.

You sit at your dusty desk at the Ministry of Truth, where your job is to alter historical records in favour of the Party. The Ministry is currently implementing a new language called Newspeak where certain words are deleted from the dictionary.

“Don’t you see that the whole aim of Newspeak is to narrow the range of thought? In the end we shall make thoughtcrime literally impossible, because there will be no words in which to express it.”

Thoughtcrime is the worst crime of all. Wherever you go, Big Brother is watching through telescreens. Wherever you go, there is the irrepressible murmur of political propaganda in the airwaves. The outside world is your enemy. Food is scarce. The torture of dissidents is rife.

Everything is great. Because that is what they tell you and this is all you know.

It sounds like a fictional story because it is. This is the world of George Orwell’s 1984. But it is also harrowingly similar to the world of today’s North Korea.

“I had to be careful of my thoughts because I believed Kim Jong-il could read my mind. Every couple of days someone would disappear. A classmate’s mother was punished in a public execution that I was made to attend. I had no choice – there were spies in the neighbourhood,”writes Yeonmi Park, a young woman who escaped North Korea.

In Nazi Germany, it was the Gestapo. In Orwell’s 1984, it was the thinkpol. And now, the mental and physical repression of the masses in North Korea is nothing short of a modern day thought-policing system. Both the past and the fiction exist in today’s reality.

For the first 15 years of her life, Yeonmi Park grew up in North Korea literally believing Kim Jong-il was an omniscient god. “I never doubted it because I didn’t know anything else. I could not even imagine life outside of the regime.” Earlier this month, she appeared on SBS Insight to share the harrowing reality of the North Korean regime.

“It was like living in hell. There were constant power outages, so everything was dark. There was no transportation – everyone had to walk everywhere. It was very dirty and no one could eat anything.

“It was not the right conditions for human life, but you couldn’t think about it, let alone complain about it. Even though you were suffering, you had to worship the regime every day.”

When her father, a government worker, was accused of doing something wrong, he was sent to prison for three years. The regime’s policy of generational punishment meant that Park’s entire family was exiled from Pyongyang to the countryside near the Chinese border.

The UN Commission has also heard many testimonies indicating there are currently 120,000 political prisoners in North Korea. Many are systematically starved and instructed to burn dead bodies into fertiliser. Mothers are forced to kill babies that are of ‘impure’ blood.

As a teenager, Park fled the dictatorship, crossing a frozen river and a winter desert to get from North Korea to China to Mongolia and finally, to South Korea. After years of brainwashing, it was difficult for her and her mother to let go of their indoctrination.

“I realised that everything I thought was a lie. I had not been a real person – I was created for the regime to work for them. If they ordered us to die, I would’ve died for them,” she writes. It took Park three years to overcome the brainwashing.

“My mother took longer than me. When Kim Jong-il died she couldn’t believe it…she said, ‘he can’t die because he’s not a human, he’s a God!’”

While Park may have escaped, some of her family and many more North Koreans have not been so lucky. In 2014, it seems unfathomable that this could be a reality for anyone. But it is.