SUV has again opted to increase its rental prices sparking accusations it is taking advantage of students’ desperation for housing, reports Ada Lee

Sydney University Village (SUV) is set to raise prices again in 2014, with the cheapest four or five bedroom apartments to cost $271.50 per week. The change represents a $14.70 or 5.7 percent increase on this year’s prices. The increase will mean that SUV’s cheapest rooms are now $60 more expensive than they were in 2011.

Many residents have been left worried and are asking why Campus Living Villages (CLV), the company responsible for SUV, has again boosted rates. Little explanation has been offered to students who are growing increasingly resentful, according to SUV resident Sophie Holt.

A spokesperson for CLV said that the company strives to deliver a safe and supportive environment that “provides value for money” to residents.

Along with market factors and customer surveys, CLV said “product upgrades” influenced pricing, pointing to various renovation projects such as repainting, carpet repairs, and work on the student common area, ‘The Well’.

However, long-term resident Camille* said these upgrades were “completely necessary” and should be “routine”. She did not think they justified the increases in rent. Camille reported seeing rats and cockroaches in the cooking areas during recent months. “The carpet was filthy, the walls were browning,” she said, “and The Well ceiling was literally collapsing”.

Considering that a five-bedroom apartment will cost a total of $1357.50 per week in 2014, Camille believes CLV is “ripping people off” even when taking into account Newton’s recent property market booms.

The University of Sydney owns 5-10 percent of SUV, sharing with other private stakeholders. Together, they set the rent. The CLV spokesperson said they recognised the cost of living pressures faced by students but did not specify whether this affected pricing considerations.

CLV are the “bad guys” according to Camille*. She doubts whether ‘affordable housing’ is actually one of their aims. “It’s really about what they can get. They know that students are desperate for accommodation near campus so they can drive the price up and they’re well within their rights to”, she said. “CLV needs to turn a profit and so that’s what they’re doing.”

Statistics provided by CLV show an 86 percent customer satisfaction rating but that only 42.9 percent of 2012 residents reapplied in 2013.

Another resident, Georgia Hitch, believes SUV offers a great student service and community but does not believe the “incredibly exorbitant” rent increases are justified. “Saying ‘oh it’s really good and people will pay it’ is not a good enough reason. That dispels the whole idea of equity among students,” she said.

Residents emphasised the importance of student housing in making university accessible, particularly for rural and interstate students. Even though private rent in outer suburbs may be cheaper, Ms Hitch, who hails from Canberra, said it can be too daunting for non-Sydney students to consider when moving to an unknown city.

The news of SUV’s latest price adjustment comes as the University looks to increase its stock of student housing and enter into an agreement with a second party to develop and administer the Queen Mary Building. The failure to keep SUV’s rates down will increase pressure on the University to come to an agreement that minimises the potential for future rate rises.

Last year over 100 students rallied and circulated a petition when SUV announced rent would increase by $18.30 per week.

*Name has been changed

They demanded that SUV maintain current rent levels, provides greater transparency from administration, and that the University take over the Abercrombie Street housing project from a private company.

After the rally, campaigners sat on the lawns at SUV and discussed future actions. Undergraduate Fellow of Senate Patrick Massarani told protesters that to increase rent by 22 per cent over two years when inflation is at two per cent was “extortionate”.*

“It is unconscionable and we won’t stand for it,” he said.

According to Mr De Haan, annual rents at SUV are set in consultation with the University as a minor financial co-owner. He believes the university’s presence on the management board has a positive impact in keeping increases lower than a totally privately operated facility.

But protesters are not satisfied. SRC Student Housing Officer, Eleanor Morley, told the crowd: “SUV proved what a disaster it is if the Uni sells to a private company.”

SRC Welfare Officer Rafi Alam told fellow campaigners their efforts must also be directed at the government, encouraging it to provide students with affordable housing.

Around campus, Mr De Haan points to a lack of beds driving the housing market. “If new facilities open up in the bracket of affordable housing,” he said, “people will gravitate towards the new beds whilst more expensive facilities will suffer.”

Not everyone is happy with the prospect of more university-provided housing. Residents’ concerns about the Abercrombie St Housing Project led the University into negotiations with community groups such as REDwatch (covering Redfern, Everleigh, Darlington, and Waterloo).

A spokesman for REDwatch, Geoff Turnbull, believes the negotiations haven’t been successful. Miscommunication had left residents with cold feet, he said. “Many residents feel manipulated rather than respected,” he told the South Sydney Herald. “The uni needs to revisit its approach if it really wants good neighbourly relations, not continued demonisation.”

Co-convener of the campus Greens and Student Housing Action Collective protestor Mr Wallin says something needs to be done about the situation. “University housing needs to go somewhere. The inner-west of Sydney is highly dense. There aren’t many free spaces. There is a way to strike a balance between [residents and students]… it certainly motivates us to do it better, to take into account their needs and rightly so.”

For a previous story on the $UV movement, click here. 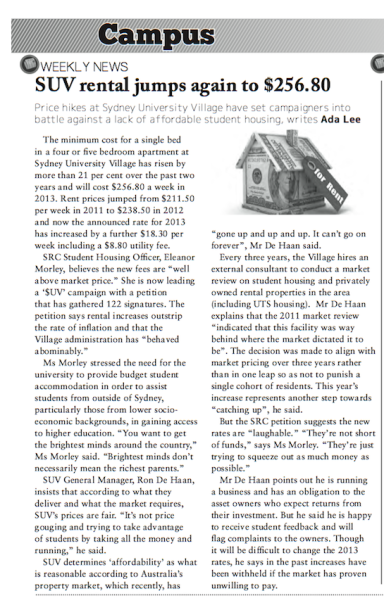 SRC Student Housing Officer, Eleanor Morley, believes the new fees are “well above market price.” She is now leading a ‘$UV’ campaign with a petition that has gathered 122 signatures. The petition says rental increases outstrip the rate of inflation and that the Village administration has “behaved abominably.”

Ms Morley stressed the need for the university to provide budget student accommodation in order to assist students from outside of Sydney, particularly those from lower socio-economic backgrounds, in gaining access to higher education. “You want to get the brightest minds around the country,” Ms Morley said. “Brightest minds don’t necessarily mean the richest parents.”

SUV General Manager, Ron De Haan, insists that according to what they deliver and what the market requires, SUV’s prices are fair. “It’s not price gouging and trying to take advantage of students by taking all the money and running,” he said. SUV determines ‘affordability’ as what is reasonable according to Australia’s property market, which recently, has “gone up and up and up. It can’t go on forever”, Mr De Haan said.

Every three years, the Village hires an external consultant to conduct a market review on student housing and privately owned rental properties in the area (including UTS housing).  Mr De Haan explains that the 2011 market review “indicated that this facility was way behind where the market dictated it to be”. The decision was made to align with market pricing over three years rather than in one leap so as not to punish a single cohort of residents. This year’s increase represents another step towards “catching up”, he said.

But the SRC petition suggests the new rates are “laughable.” “They’re not short of funds,” says Ms Morley. “They’re just trying to squeeze out as much money as possible.”

Mr De Haan points out he is running a business and has an obligation to the asset owners who expect returns from their investment. But he said he is happy to receive student feedback and will flag complaints to the owners. Though it will be difficult to change the 2013 rates, he says in the past increases have been withheld if the market has proven unwilling to pay.